Our relationship with Salt Paper Studio began in a wonderfully serendipitous way. If you put our company values side-by- 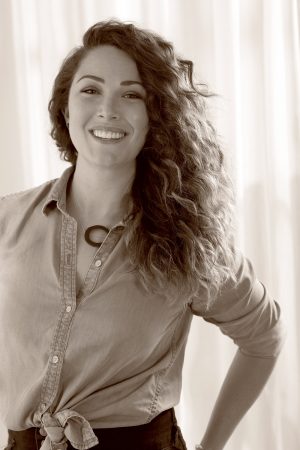 side, it makes sense that we’d be partners … but we didn’t know that then.

Owner Courtney Swift-Copeland saw one of our Instagram posts and reached out to us for a meeting. Over coffee at Southern Sugar Cafe, we learned that Beyond Marketing was being invited into the Salt Paper Studio family more so than we were engaging in a networking conversation. We hit it off immediately and neither team has looked back.

Today, we manage Google Ads for Salt Paper and we’re raving fans of their work.

The Salt Paper Studio story grabbed our attention, and we think it’ll grab yours too. Here’s the skinny:

Home Away From Home

Courtney is a long way from where she cut her teeth, but when you hear her talk about her childhood, it’s no surprise she feels right at home in the sweet South.

Her memories of the Delaware coast are of long days on the water and peaceful camp outs under starry skies … family gatherings and big, together-made meals … the smell of saltwater in the air and the feeling of dirt underfoot.

And she’s no newcomer to the region, either. Courtney earned her degrees from SCAD (The Savannah College of Art & Design). Following graduation, she headed back north for big-city opportunities and, having gained hard-earned stripes, settled in Charlotte in 2013.

Her timing was perfect. That St. Patrick’s Day, a friend introduced Courtney to her now-husband Justin at McHale’s Irish Pub on Main. In their own words: she’s the creative and he’s the analyst. She’d met her match and her Southern roots were officially planted.

As a freelancer with The Creative Group, Courtney took on the role of Project Manager and Producer position at Belk following their iconic re-brand.

She then joined the Springs Creative Products Group in Rock Hill where, within a year, she was entrusted to build a little commercial photography studio. Two years later, she was given the green light to build a big one. Here, she produced and shot textiles and products for household names in e-commerce.

Courtney had long dreamed of opening her own production studio. One night, while sitting with Justin at Main Street Bottle Shop in Rock Hill, Courtney lamented: If only I had a building. Within minutes, the bartender had them touring an old laundromat – complete with green shag carpet, yellowed ceiling tiles and busted washing machines.

Before the left side of the brain could protest, the right side said yes.

Today, Salt Paper is a fully-equipped and mega versatile six-room production studio that serves as a platform for staging products for e-commerce and print, and for creating the illusion of a bedroom, dining room, living room or kitchen space.

Dedicated to the craft and grateful for community, Salt Paper Studio also features a dedicated gallery space for showcasing the work of local artists and hosting fundraisers and events.

The name of the company is significant. Salt paper photography is the art form’s most primitive technique. Simply stated, it’s the process of placing a negative over sodium chloride-covered paper, letting it sit in the sunshine to develop, and then washing it to reveal a print.

In establishing Salt Paper Studio, Courtney was intentional about getting back to basics. Having worked up and down the East coast, she’d seen first-hand that the creative process can get overly complicated and involved. She valued the prospect of doing business differently.

Salt Paper Studio is warm, inviting and cozy. Couches, a record player and choice vinyl, a stocked fridge, and a studio pup named Saige. This isn’t purely transactional, it’s a partnership. The Salt Paper team wants you to feel comfortable and inspired; to feel empowered to tell your story.

And setting up shop in Rock Hill rather than nearby metros translates to reasonable overhead, a benefit Salt Paper directly shares with their clients. Salt Paper delivers big-budget results of the highest quality at a price unmatched in the region.

From under one roof, Salt Paper Studio offers art direction, production and photography – a novel idea in today’s creative climate where processes are separated by departments or siloed between companies.

Offering wrap-around services in-house is a big deal, and one of Salt Paper’s secrets to success. Rather than their clients having to call around to different studios to shop the feasibility of an idea and then curate the talent and crew to pull it off, Salt Paper Studio does it all.

The client shares the vision, and Courtney and her crew bring it to life:

Salt Paper Studio is super high-touch because they care about your brand promise and value your unique story.

A stone’s throw away from our offices on Fort Mill’s Main Street, Beyond Marketing is proud to know and recommend the Salt Paper Studio team for all commercial photography needs. Their vision – in concert with their expertise to pull it off – makes Courtney and her crew a game-changing resource, right on our doorstep.

Cheers! We’ll look for you next time we’re at the Bottle Shop …